Bleeding during your menstrual cycle is a regular part of life. This means that regular bleeding is a sign that your body’s reproductive health is normal and concern-free. However, if you experience abnormal bleeding, it can mean there may be some underlying concerns that should be assessed by your gynecologist.

What is Abnormal Bleeding?

Abnormal bleeding is bleeding that is different than your normal menstrual cycle or occurs at different times. This includes:

Abnormal bleeding or a skipped period on occasion is normal and often not a cause for concern. Birth control, certain medications, stress, weight changes, or exercising can temporarily disrupt your menstrual cycle. Although women often have irregular bleeding at some point, it can be problematic if it occurs regularly.

During the pre-menopausal stage, women’s cycles will get longer, and it is common to either have prolonged bleeding or skip your period for several months. Women are not fully in menopause until their cycle stops for 10-12 months. The average age for the onset of menopause is 52. Some women’s pre-menopause symptoms do not start until their late 40s, but other women will start to feel the effects in their early 40s. For these women, it is especially important to make an appointment with a gynecologist to make the menopausal process more manageable.

Pre-menopausal symptoms can be uncomfortable, and it is often difficult to make the transition into menopause due to hormonal fluctuations and resulting physical changes. Symptoms include: 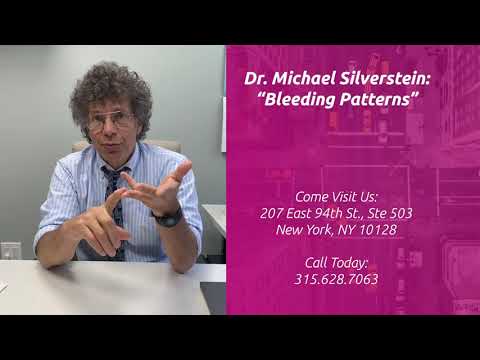 Why is Abnormal Bleeding Important?

For this reason, it’s important that your gynecologist assesses your health and can determine whether your abnormal bleeding may be serious or not. Interestingly, abnormal menstrual cycles are more common in certain age groups. We find that in young girls who are first starting to get their period and in women who are peri-menopausal, periods may come more or less frequently. However, the continuation of irregular bleeding 2-4 years after first receiving your period should be examined by a gynecologist to rule out any potential complications. Young girls may feel nervous going to a gynecologist, but the only physical examination that will be performed is a blood pressure and heart rate test.

How Can My Gynecologist Help?

If you’ve noticed irregular or abnormal bleeding that you believe is problematic, you should make an appointment with your gynecologist. They can discuss your symptoms and perform some examinations, as well as order the appropriate tests. This might include simple blood tests that can detect hormonal imbalances or early pregnancies. If your hormone levels are irregular, it may be a sign of a hormonal disorder such as polycystic ovarian syndrome. These disorders are treatable if detected early, so it is important to visit a gynecologist early (mid-late teens) to prevent long-term complications.

An ultrasound can help identify abnormalities of the uterus or ovaries. A biopsy of the uterine lining can also be performed to rule out cancer and examine growths such as polyps and fibroids. This procedure is called a hysteroscopy and it uses a tiny camera to safely examine the uterus and take a sample of the lining of the uterus. It’s important to remember that these tests are used in rare instances where abnormal bleeding is caused by a more severe health concern. However, it’s always safe to discuss your concerns with your gynecologist who can make the best recommendation.

Birth control pills are still safe to take in your 40s and they can help to ease pre-menopausal symptoms. However, some symptoms such as hot flashes are more difficult to manage and may have to be treated with medication or hormone therapy. Hormone replacement therapy treats uncontrollable symptoms that are significantly impacting pre-menopausal women.. That is why it is important to receive annual mammograms and breast cancer screenings beginning in your 40s.

Tests for bone density and colon cancer should also be performed regularly since the loss of estrogen associated with menopause can weaken your bones. To prevent osteoporosis (weak bones) from developing later in life, start supplementing calcium in your diet and add weight-bearing exercises to your routine in your 20s.

Abnormal menstrual bleeding is common and very treatable. Your gynecologist will likely be able to help normalize your bleeding with medication first. Options usually include birth control pills, IUDs, patches, or vaginal rings. If tests find that your bleeding is the result of something more severe, surgery can sometimes be performed. Your gynecologist will make sure you understand your options during an appointment.

Abnormal bleeding can sometimes be cause for concern, so it’s important to partner with an expert gynecologist who can discuss your options and treatments. To schedule an appointment with our compassionate team, contact our New York City office by calling or filling out our online form.

Can stress cause longer periods?

Stress can have a variety of effects on your menstrual cycle. This can include longer or shorter periods, heavier or mid-cycle bleeding, or your period may stop altogether.

Can stress cause postmenopausal bleeding?

What is abnormal vaginal bleeding?

Abnormal vaginal bleeding is any unusual or heavy bleeding from the uterus. It can happen during any time of your monthly cycle, including during your menstrual period.

Abnormal bleeding is often not a cause for concern. However, it can sometimes be caused by various birth control methods, thyroid or hormonal imbalances, uterine fibroids or polyps, undiagnosed or abnormal pregnancies, or pre-cancerous/cancerous lesions.

Menu
“I had an amazingly great experience! The facility was easy to find and navigate, even in my wheelchair. All of the staff were very friendly, courteous, helpful, and understanding of all of my needs and concerns, physical, mental, and emotional. Dr. Silverstein was particularly knowledgeable and sensitive to my situation. This place was wonderful! I will never dread my GYN appointment again, and that’s saying something.”

Please be advised that neither physicians nor nurses can provide medical opinions or consultations via email. Email inquiries should be limited to general questions. We have provided information on this site under Patient Resources that covers many topics related to our specialty to assist you with questions on specific topics.